It has been a while since I've completed a painting. I've been busy taking care of other aspects of my life while trying to keep everything in balance. With this said, I hope to devote more time to my artwork in the coming months.

This painting is of sort, a companion piece to ''A Cat and Fish Tale'' created more than two years ago. It is also a piece about celebrating life. In this case, the life of Maurice the fish. Maurice, our pet gold fish was purchased in April of 2010, specifically as a painting prop. Much to my surprise and delight, Maurice is still alive and well and has probably grown about an inch since his first modelling assignment.I did the photo study for the painting in early March on his two year anniversary with us, which would account for the snow outside the window. 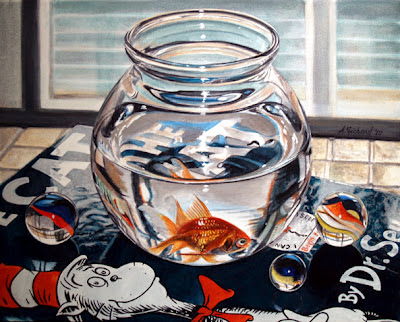 After spotting Dr. Suess' ''One fish, two fish, red fish, blue fish'' 50th anniversary edition book with the gold cover in a few stores around town, the concept came to me. However, I decided to use a regular edition book with the yellow cover to anchor the composition. It was purchased as a set along with ''Green Eggs and Ham'' on eBay. These books are Dr. Suess' three best selling titles. In 2000, they were ranked in the top 15 best selling children books of all-time.

With the most recent box office success of the computer-animated film ''The Lorax'', the spirit of Dr. Suess  (Theodor Suess Geisel) remains alive and well. Life often has a funny way of letting you know what is important if you are awake enough to see the signs. This past Easter while walking in front of the White House in Washington D.C. during the Easter Egg Roll, this young mother and child were leaving the grounds and she was sporting a very familiar tote bag, which reminded me the importance of pursuing the imagery. 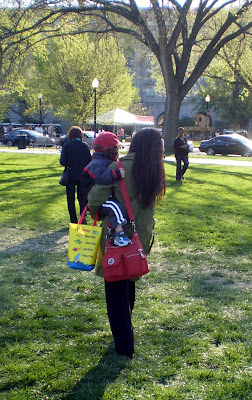 Update- February 24, 2014
Today, Maurice the fish journeyed to the largest of all fish bowl, one without glass. We will miss you little buddy, it was a great 4 years.