Marathon, a self portrait 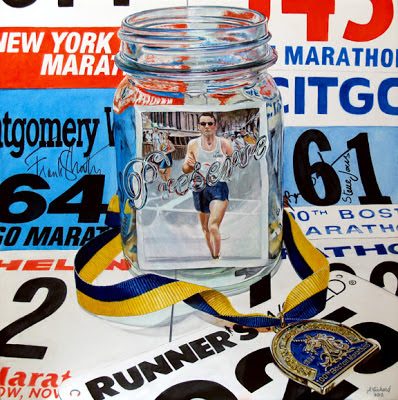 The Elliott Fouts Gallery in Sacramento, CA invited me last summer to take part in an invitational group show entitled ''Face Yourself'' that will feature artist self portraits. The invite stated, ''This can be conceived from your own point of view, how you think people view you, etc...You can get as creative as you want, there are no rules. I think the possibilities are endless and the outcome of the show is going to be fabulously unexpected and fun''.

I really went outside the box for this one, and literally inside a jar. Although I have been painting for 25 years, my artistic professional career only began 10 years ago. Prior to 2002, I completed an average of only two paintings per year. For a full decade, my main focus during my spare time was pursuing my dream of being a marathon runner.

I started running in 1976 at age 14 while in junior High School. The Summer Olympics held in Montreal that same year would leave an indelible mark on me. When Canadian Olympian Jerome Drayton won the Boston Marathon the following spring in 1977, his victory would ignite the flame within me to become a long distance runner and to one day follow in his footsteps. 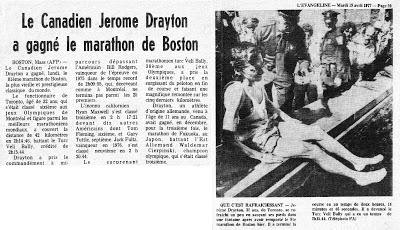 The journey getting there was long and arduous. After competing in athletics and cross country races in junior and high school, I made the transition to road races.  During my twenties, I had my share of running related injuries and was diagnosed at age 26 with heel strike hemolysis. A rather rare condition causing damage to red blood cells occurring during intensive training and repetitive foot strike when running resulting in anaemia. This was corrected with iron supplement and kept in-check afterwards while continuing the therapy.

In September 1992,  at age 30, the stars finally aligned for me and I would run my first full marathon. I had waited so long for this day, and thought it might be my one and only, so I decided to go big and run the Toronto Marathon, the city where my hero Jerome Drayton lived. I was so overwhelmed by it all and remember being teary eyed several times during the race. Half way in, I was still on pace to qualify for the Boston Marathon. With about 5 miles to go, I would hit the wall. I would however get a second wind on the final mile and had enough left in the tank to sprint the last 200m as we were greeted inside Varsity Stadium where a massive jumbo screen was set up and spectators in the bleachers cheers us in. I finished in a time of 3h22:10. It was a defining moment in my life and from that point on, I was hooked.

My next goal was to achieve the qualifying standard for the Boston Marathon which was 3h10:59 for a male runner under 35. This would finally happen seven marathons and three years later on May 14, 1995 at the Johnny Miles Marathon in New Glascow, Nova Scotia. On this very difficult course, I would achieve a personal best of 3h11:30.  I would find out later that year that my clocking would stand and I received my ticket to the start line of the historical 100th running of the Boston Marathon that was held on April 15, 1996. Running my first Boston Marathon easily qualifies as the greatest moment of my whole athletic journey. The history behind this event is rich and is considered by many as the people's Olympics. It has always been held on the third Monday of April on Patriots Day. The inaugural running of the Boston Marathon took place in 1897. It was inspired by the marathon of the first Olympiads of modern era held in Athens, Greece the previous year.

In total, I completed 22 marathons and every one hold a special place in my heart. From the get-go, I decided to combine the races with travelling, and visiting art galleries and museums whenever possible. For the exception of three Boston Marathons (1996, 1999 and 2000) and two New York City Marathons (1994, 2002), all the others were in different towns and cities, twelve in the United States, nine in Canada plus the Bermuda Marathon.

In the composition for this painting, the photograph of myself was taken during the last mile of the 1999 Boston Marathon. The seven bid numbers used in the composition are among the marathons which hold the most importance on various levels.  From the top left -clockwise: 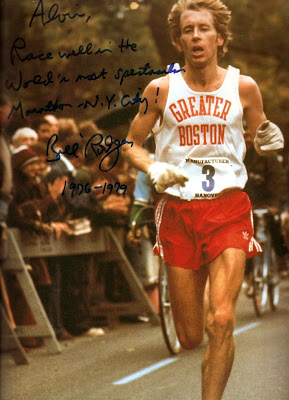 Bill Rodgers is a 4-time New York City and
4-time Boston Marathon Champion.
One of the greatest ambassador the sport has ever known.

By using a Mason jar, I am essentially preserving the memory of a self from a not so distance past, during a period where I physically felt the most alive and invincible.

UPDATE- January 5, 2013
This painting is currently on exhibit in ''Face Yourself'', an Invitational group show being held from January 3-31, 2013 at the Elliott Fouts Gallery in Sacramento, California.

Collection of the artist.
Posted by Alvin Richard at 22:42