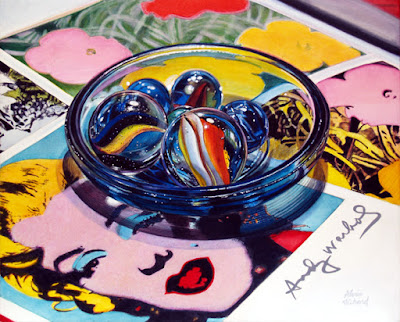 Yet another instalment and tribute to Andy Warhol. This composition superimposes a postcard of Marilyn Monroe over ''Flowers, 1970'', serigraph print portfolio shown upside down from the art book, POP ART by Tilman Osterwold, published by Taschen (1990/2007).

I've just returned from a 5-day trip from Philadelphia, PA.  A beautiful city rich in architectural wonders, history, culture and art. Also, the cradle and birthplace of the United States as an independent country. I had been wanting to visit the city's impressive art institutions for the longest time and was not disappointed. Au contraire, I was awestruck by it all. A combination of wealth, philanthropy and good guidance has amassed such wonderful collections spread across four major art museums that I've had the privilege to visit.

The Barnes Foundation alone is so impressive and has the greatest private collection of Impressionist, Post-Impressionist and early modern art amassed by one individual, Dr. Albert C. Barnes. A total of 3000 works that include 181 Pierre-Auguste Renoir, the single largest collection of the artist in the world. Holdings also include 69 Paul Cézanne, 59 Henri Matisse, 46 Pablo Picasso, 16 Amadeo Modigliani, 7 Vincent Van Gogh, 4 Claude Monet and at least 3 Georges Seurat.

The Rodin Museum is also the single largest collection of sculptor by Auguste Rodin's work outside of Paris, all amassed by movie theater mogul Jules Mastbaum. The museum opened in 1929, three years after Masterbaum's death. I have visited the Rodin Museum in Paris back in 1989. This was a beautiful re-acquaintance with is work.

The Pennsylvania Academy of Fine Arts Museum and Art School was founded in 1805 and is considered the first and oldest of both in the United States. The museum only had a few people when we visited on a Sunday afternoon to witness an outstanding collection. Mostly American master painters with the likes of the Peale family, trompe l'oeil master William Harnett, Rideway Knight, Thomas Eakins, Robert Vonnoh, Cecilia Beaux, Edward Hopper, Peter Bloom, Childe Hassem, Karl Anderson to name just a few. Also on view was a magnificent solo show of recent alumni James Toogood, who's hyperrealist watercolours and pastels were new to me but did not leave me indifferent.

Last but not least the Philadelphia Museum of Art which opened it's doors in 1877, a year after the United States held it's first World Fair. It is a World Class Museum and one of the largest in the country. I ended up spending more than 3 hours but could have spent a few days easily. Opening on the day of our visit was ''Aububon to Warhol: The Art of American Still Life''. The first survey of it's kind in the past three decades. Click HERE for details. Outside the main entrance was Robert Indiana's 1998 AMOR, on view especially to honour Pope Francis on the occasion of his visit to the United States. The iconic, six-foot-high sculpture overlooking the Benjamin Franklin Parkway, site of the public papal mass which took place on September 27 in front of hundreds of thousands during the world meeting of families. 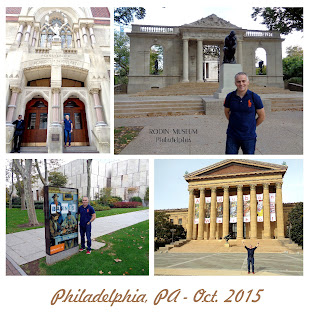 To be exhibited in the 2015 Small Works Invitational at the
Ober Anderson Gallery
101A West Argonne Drive,
Kirkwood, Missouri
(St Louis, MO) 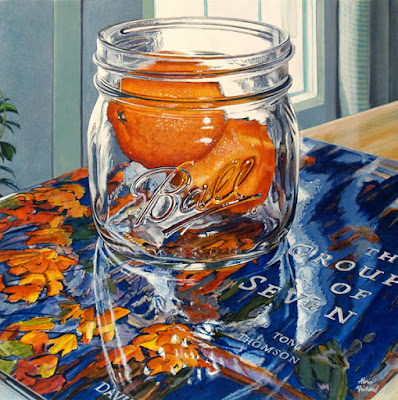 I was introduced to the book, The Group of Seven and Tom Thomson during a visit to the Moncton Public Library during the fall of 2014. Not long after I returned it on loan, I had to purchase a copy for my own.  Although the book was first published in 2005 by Firefly books, it somehow flew under my radar during the past decade. It was written by art historian, David P. Wilcox (b. 1937). It is one of those quintessential books that no art library should be without. The massive 441 page volume encompasses different aspects of the life, spirit and physical environment of the Canadian landscape as seen through the eyes of the celebrated Group of Seven and affiliated luminaries.

The front cover is graced with Autumn, Algoma (1920) by Lawren Harris. The Group of Seven also known as the Algonquin School was a group of Canadian landscape painters from 1920 to 1933.  Tom Thomson is often associated with them, but in reality in died at age 39 under mysterious circumstances on Canoe Lake, Algonquin Park, Ontario in 1917, before the group was even formed. Thomson's artwork is often considered as a main source that inspired the group to explore the landscape in a post-impressionism manner.

While the Group of Seven may not be widely known outside Canada, things may be about to change. Actor Steve Martin, a serious art collector has just curated an art exhibition that will feature Lawren Harris in is first solo exhibition to travel south of the border. It was done co-jointly with the Art Gallery of Ontario and the Hammer Museum. The travelling exhibition will see stops on both U.S. coasts. ''The Idea of North'' just opened at the Hammer Museum in Los Angeles and runs through January 24 before heading to the Museum of Fine Arts in Boston from March 12- June 12, 2016. The collection will later be shown at the Art Gallery of Ontario on it's final stop from July 2 to September 11, 2016. You can read all about it on this LINK and on this LINK.

I did the photo study for this painting during the dead of winter, while outside, the deck and backyard were completely covered in a blanket of snow. It was quite a challenge to paint in details, the partially abstract rendering of the book's cover with refracted light. 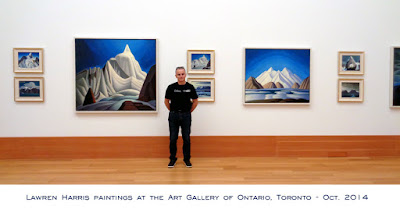 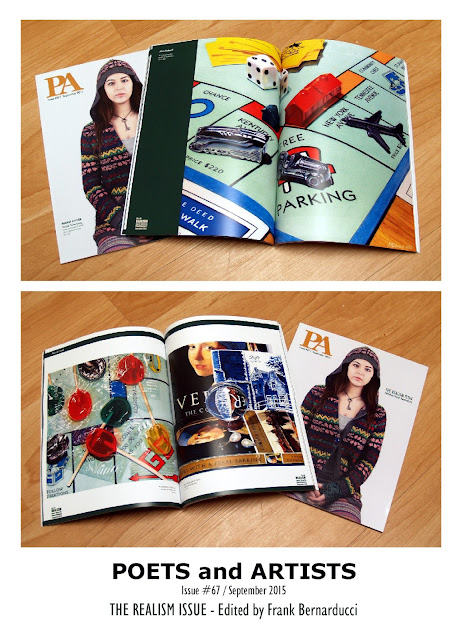 I'm very fortunate and honoured to be among 19 AMAZING artists from around the globe to be featured in the current issue of PA magazine (Poets and Artists). The September issue featuring Realism was guest edited by Frank Bernarducci of the Bernarducci-Meisel Gallery in NYC.