Lost a marble over a Girl (aka - Crazy for this Girl) 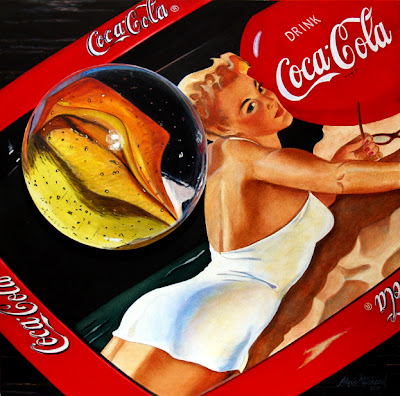 This past January, I received an invitation to participate in a Realism Juried Show organized and held at the Mason Murer Fine Art in Atlanta Georgia. The show will run from April 8 to May 12, 2011.  It's a kind of opportunity that only until recently, I could only have dreamed of. 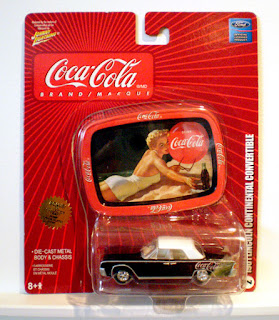 I came across this die cast 1961 Lincoln Continental convertible while Christmas shopping for my son during the late fall of 2007. It featured a miniature Coca-Cola tin tray as a bonus item. I actually bought it for the tray and did a photo session not long after. With the Coca-Cola's headquarters located in Atlanta, the timing seemed perfect to finally bring this image to light, since Coca-Cola has often contributed in my choice of subject matter while documenting popular culture.


﻿I did some research in order to give credit to the illustrator of the lovely bathing beauty depicted on the tray and suspect that it might be attributed to painter illustrator Gil Elvgren.


The most intimidating factor in the imagery was to get the facial features correct and for the marble to even have more impact as the main object competing for the viewer's attention. In both cases, I am happy with the outcome. Even if the painting is only 12 x 12'', the subject depicted here is enlarged by 500%. The photographic image was a bit grainy when enlarged. I worked from several photographs in order to eliminate the depth of field to give the impression as if it was painted from life rather than from a photo. Without the help of my new ipad, I'm not certain that I could have pulled it off. My inclusion of a marble in a painting may appear decorative, but more often than not it refers to an altered state of mind. In this case, it is both.


I borrowed the title from an Evan and Jaron song of the same name. Twin brothers, Evan and Jaron Lowernstein grew up in Tucker, Georgia.....located 15 miles from Atlanta. Click HERE to listen.