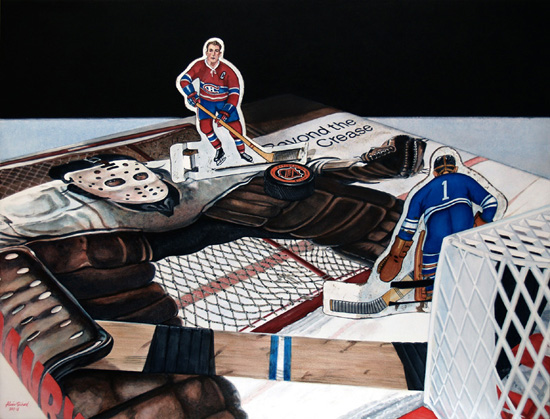 The majority of my artwork is about documenting aspects of popular culture and paying homage to luminaries who have made a difference in their fields. Ken Danby (1940-2007) is one artist whom I instantly gravitated to when I started to paint more than 30 years ago. I've flipped through Ken Danby: The New Decade written by Paul Duval (1984), so many times that the pages are falling out. I was especially fond of his egg tempera and watercolour paintings and the direction he took with the imagery. Also his earlier work that seemed influenced by Andrew Wyeth.
Over the years, I've acquired three books and several catalogues of Ken Danby’s artwork. The most recent was published in conjunction with a retrospective held at the Art Gallery of Hamilton in the fall of 2016,  entitled "Beyond the Crease". We were visiting the Niagara escarpment four days before the show opened and we were able to view a portion of the exhibition as it was still being mounted. I was very fortunate to view his solo show "Earth, Sky and Water" at the Bernarducci-Meisel Gallery in NYC, during the fall of 2002. I also own two of his serigraphs prints, the most recent acquired last summer from a German art gallery. 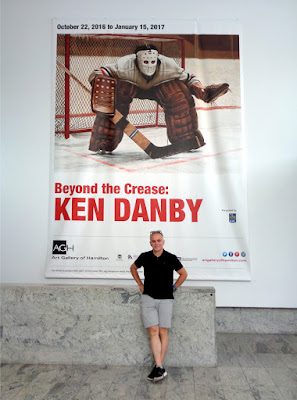 Art Gallery of Hamilton, October 2016
Ken Danby's sudden passing on September 23 2007 shook me to the core. He was only 67 years old. He collapsed while on a canoe trip with his wife Gillian and some friends in Algonquin Provincial Park. Paramedics were unable to revive him. He was still playing hockey in a gentlemen's league called the "Guelph Goodtimers''.
In 2017, one of my paintings was published in the book, "Ingenious" written by the Hon. David Johnston, the past Governor General of Canada and Tom Jenkins. The book celebrates Canadian inventors who contributed in making the world a better place. My painting used in the book was a commission piece paying homage to Edward R. McDonald who invented the first version of the Scrabble Board Game.
The idea for this new painting, "Hockey Night in Canada, 1972" (La soirée du Hockey, 1972) came to me after flipping through the book. Canadians are credited for inventing the game of hockey (p.180), the championship Stanley Cup (p.185), Jacques Plante inventing the goalie mark in 1959 (p.110) and Donald Munro for creating table top hockey in 1932 (p.194).
Ken Danby's iconic painting, "At the Crease" was painted in 1972.  The Canadian Encyclopaedia has called  At the Crease - "a National Symbol".  An episode from the BRAVO! docu-series, "The Artist's Life" featuring Danby aired on television shortly after is passing. Here, he discusses his intentions behind the imagery.

"I did that painting because I had to get it out of my system, based on an actual experience right here on this river playing hockey. Playing a game, the goalie, a young goalie was wearing a mask. Well it was the first time in my hockey experience after being away from it for some time that I was actually at ice level, skating on with a goalie, wearing a mask. That's why I painted that painting. It's a work that I resisted for 3 years because I felt that it was kind of Sports Illustrated".

The team crest was intentionally omitted, allowing viewers to see the goalie as a symbol of personal confrontation rather than an illustration of a particular goalie from a specific team. When the CBC Life & Times of Ken Danby that aired on November 2, 1998, it was stated that 100,000 reproduction prints of At the Crease had already been sold around the world.
After researching as much as I could, the whole narrative came to me. I used 1972 as the timeline for my composition. That year, I was 10 years old. I remember clearly that Canada and Russia were playing game 8 in the Summit Series since the whole school gathered in the cafeteria to watch the last period on TV with Paul Henderson scoring the winning goal for Canada. It is also the year the I started to play pond hockey prior to playing in an organized league (Pee-wee & Bantam).
With all of this said, I'm checking off several items from a list that is not just meaningful to me, but to millions other Canadians. 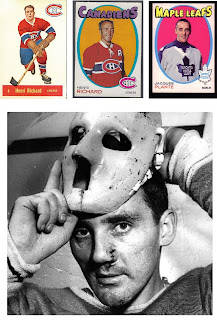 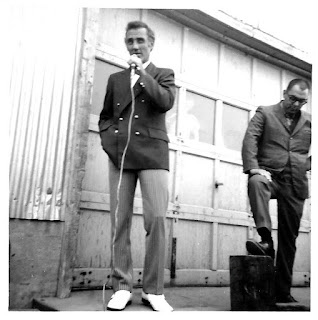 Jacques Plante, invited guest at my hometown
Summer Festival in Cap-Lumière, NB -circa 1971

Finding the props was somewhat challenging. I purchased the vintage 1960's Coleco tabletop hockey players on eBay, from a seller living in BC. The hockey net was from a seller living in Nova Scotia while the puck was purchased at the NHL Hockey Hall of Fame store in Toronto during our visit this past October. The puck was larger, so I digitally reduced it to size and affixed the NHL logo.  Just outside the NHL store, the atrium opens to retail outlets where a large bronze sculpture of Danby's, At the Crease is on display.  Outside the museum itself was a display case that had the last hockey jersey worn by Henri Richard as team captain. 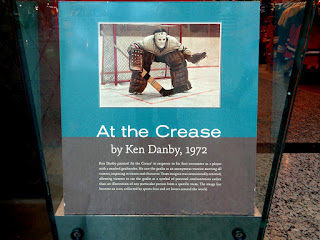 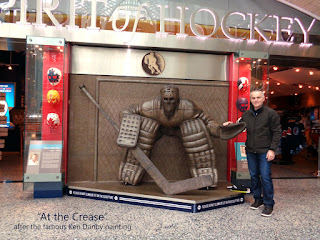 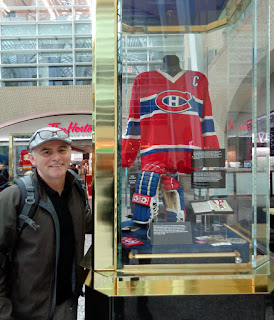