Bowl of Fruits for Mary, an homage 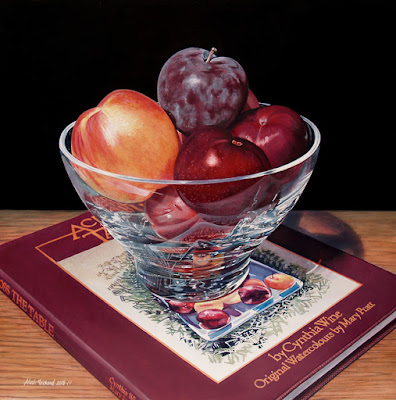 I completed my first acrylic painting 32 years ago. With the passage of time and having many outside influences that informs my art, I can attest without any doubt, that Mary Pratt as been the most influential artist/painter of my artistic career.

In 1987, when I moved to Moncton , NB, it was not long before I started to frequently visit the Owens Art Gallery at Mount Allison University in Sackville, NB. It was here that I was introduced to her art. Some of the first paintings of hers that I saw were "Romancing the Casserole", 1985 and "Hollowed Eggs for Easter", 1983. I can vividly recall being awestruck by them and was enamored by her ability to transform a fleeting moment of her own domestic life into art. The way she frames the images, her ability to capture light and shadows, her unique bold colour palette are but some of the signature characteristics that drew me in from the start. 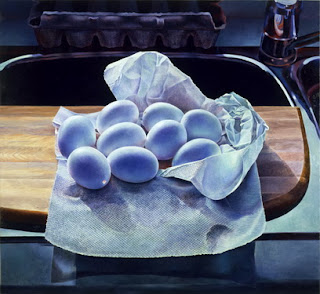 Since the beginning of the millennium, I've done several paintings that were generally inspired from her oeuvre, others were homages to her while using some of her art books to anchor a still life composition.

My homage painting “Made in Canada” (2014) was recently published in the book, “Central European Journal of Canadian Studies”, volume 12 / 13 (2018). It appeared in an article entitled “The Book Cover as an Artistic Statement and a Cultural Phenomenon - A Canadian Example” written by Nikola Tutek. The article surveys the interrelations between the writer and the artist, in this case - three of Alice Munro’s books featuring Mary Pratt’s artwork. This book was published by Masaryk University in Brno, Czech Republic. I felt extremely honored to be included in the same breath of these two Canadian icons. 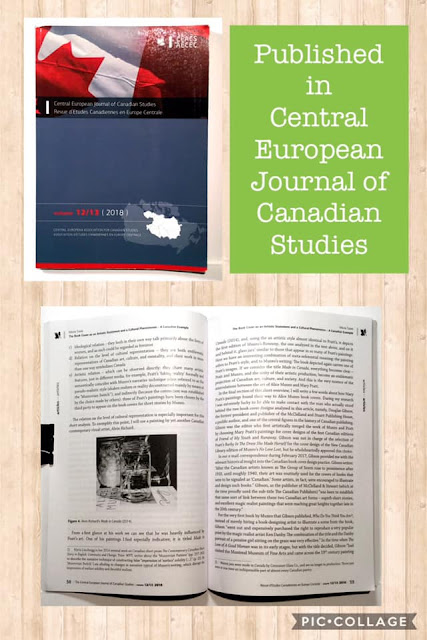 The inspiration for this current homage painting, "A Bowl of Fruits for Mary", was sparked when I saw a cook book while browsing on eBay last summer. I was not aware of it's existence until then. "Across the Table, An Indulgent Look at Food in Canada" was published in 1985 by Prentice-Hall. It was a collaboration between Cynthia Wine and Mary Pratt, chronicling regional culinary specialties found on the back-burners of stoves in homes across the country. Cynthia Wine is a critically acclaim Canadian writer born in Winnipeg. Mrs Wine was a restaurant critic at the Toronto Star for 25 years and a food editor at Homemaker's Magazine. Mary Pratt created three dozen watercolour paintings and 5 drawings especially for the book. All of these images were new to me. Many of them are watercolour sketches, some are presented in form of a story board while others are very elaborate, polished and masterfully painted like "Live lobsters with claw bands", "Corn in a Polish dishcloth" and "Tea tray with Florentine".

Mary Pratt was a very prolific painter. She has stated in interviews that she made many sacrifices including not having an active social life in order to paint, to stay focused and to dedicate her life to art. It would be very interesting to see the catalogue raisonné for the totality of her artwork. Her most famous paintings have been published in art books or shown in retrospective exhibitions, but many are unpublished.

Since her recent passing, her artwork has garnered immediate consideration and attention. Last fall, her oil painting Preserving Summer - Black Currant Jam, came up for auction with an estimated value between $30,000 - $40,000. When the hammer fell at the Heffel Auction House in Toronto, the painting sold for $133,250 (including buyer's premium), more than doubling her previous record price of $59,000 Can. 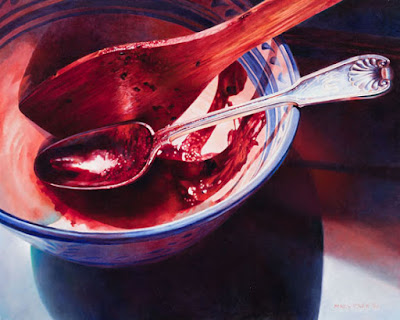 Mrs Pratt was one of the driving voices in establishing The Rooms, the provincial art gallery and archives in St John's, NL where she had lived since 1992. In addition to painting, Mrs Pratt was also a writer. Her book, A Personal Calligraphy, published in 2000, contained more than 30 works of art done during the 1990's along with her writings from speeches, published articles, essays and journal entries.

Bowl of Fruits for Mary, an homage was completed in early February. Yesterday, I drove to Sackville, NB to deliver the painting at the Fog Forest Gallery. Unbeknownst to me, the Owens Art Gallery would be hosting the exhibition- Mary Pratt: The Floating World from March 1 to May 17. 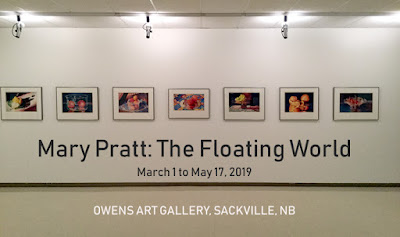 This exhibition celebrates the intricate, dazzling, and sometimes unsettling artistic vision of Mary Pratt. Featuring a selection of works from our permanent collection, the exhibition spotlights a series of woodblock prints Pratt created in collaboration with Japanese master printmaker Masato Arikushi. This nine-year creative exchange, one of the most important of Pratt’s career, produced a breathtaking suite of carefully observed, spectacularly lush meditations on still life as an expression of the transitory nature of life. On the occasion of her solo exhibition Simple Bliss (2004), Pratt wrote, “The most unexpected delight has been my association with Masato Arikushi in the making of the series of prints we call Transformations. I found an artisan who understood my ideas so well that he needed little input from me once he had studied the paintings I provided. Gradually his own ideas melded with my original images, and I detected his own imagery inserting itself into my own. I liked that. It all fit.”
This exhibition has been organized in memory of Mary Pratt, who was a graduate of Mount Allison University’s Fine Arts Department (Class of ’57). She passed away in August 2018 at the age of 83.
Curated by Emily Falvey  (1.)


I had written a few letters of appreciation to Mrs Pratt, especially after viewing a few of her retrospective exhibitions. To my delight, she always graciously replied. Sharing a bit of her insight and giving me words of encouragements. I appreciated a lot of her philosophies of life. I will always remember Mary Pratt as the beacon of light that she was, in life and through her art.

Part of a group exhibition at the Fog Forest Gallery
OPEN BORDERS
May 9-26, 2019 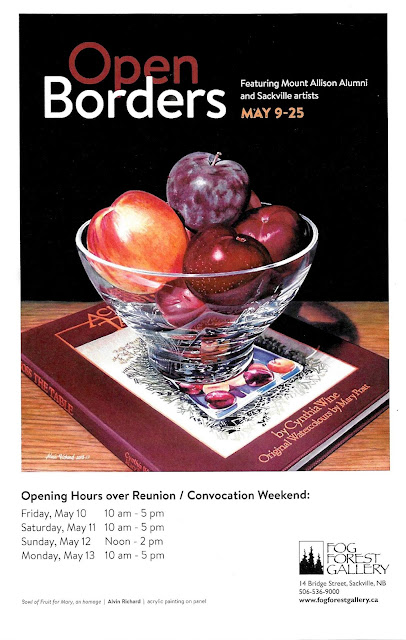 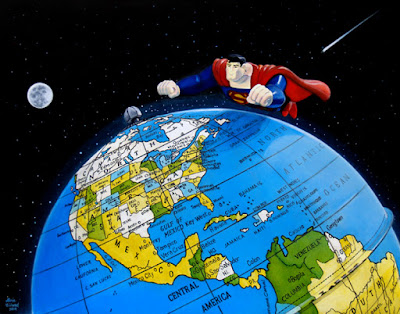 Each spring, the Rothesay Netherwood School holds its annual art show fundraiser to help raise much-needed funds to support programming and capital projects that benefit the students – 2019 will mark the school’s 31st annual art show and sale fundraiser. The school which was established in 1877, is an independent/private boarding and day school for grades 6-12 in Rothesay, NB.

This show features the work of local and regional professional and emerging artists.

Funds raised during this year’s event will be used to fund priority projects to enhance the school’s campus and enrich the learning environment for our students.

I was contacted by the school earlier this year to submit a piece. "A World in need of more Superheros" will be exhibited and up for sale during the event.

On Friday, May 10th, 2019, RNS will bring art lovers, collectors, and artists together for an evening of fine art, great food, music, and fundraising. The show will continue throughout the day on Saturday, May 11th.

The list of artists with a preview of the works to be shown, can be found on this LINK.

My Blog post for this painting is at this LINK