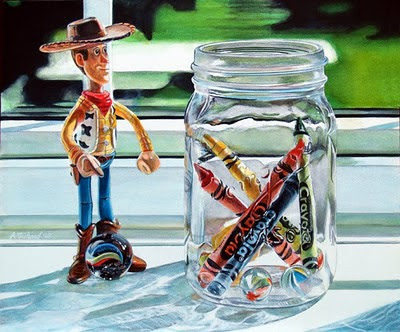 Pixar's Toy Story was release in 1995, the same year my son Jean-Luc was born. It was the studio's first full-lenght film and the first ever feature done using computer generated imagery. When Jean-Luc was old enough to talk, he started asking to watch the VHS tape, and has probably viewed it dozens of time. By the age of three he had rename Buzz Lightyear, Buzz Suckle.


I was a fan of Pixar from the get go. They set the bar very high for themselves and other animation studios. Not only are the visuals completely mind boggling, the scripts are always so brilliantly written and the choice of voice-over actors truly bring the characters to life. No studio has received more critical and commercial success as this franchise.


Toy Story 2 was released in theaters in 1999. Jean-Luc received the VHS tape as a Christmas gift when it was released the following year. In the same box as the film was the entire collection of small action figures that could be purchase at McDonald's with or without the Happy Meal.


Toy Story 3, Pixar's 11th feature film was released less than two weeks ago and has already grossed 335 millions worldwide and is most likely to break the studio's worldwide gross of 867 million held by Finding Nemo (2003). I saw it last week-end with Jean-Luc at my side. The final 30 minutes are extremely sentimental and I did find it hard to hold it together. Andy is moving on to college and the storyline follows his toys as they are accidentally put at curbside in a garbage bag instead of in a box in the attic in storage. Only a few of his toys remain. As Andy outgrew many of them, some were sold at a yard sale including Woody's significant other, Bo Peep.


Jean-Luc's toys have had a similar faith. He is not a pack rat nor a hoarder. Most of his toys have also ended up in yard sales, given to smaller children or donated to charity. I've kept Sheriff Woody Pride in my studio since he parted with the rest of his toys from Toy Story. I knew one day that I would want to paint him. 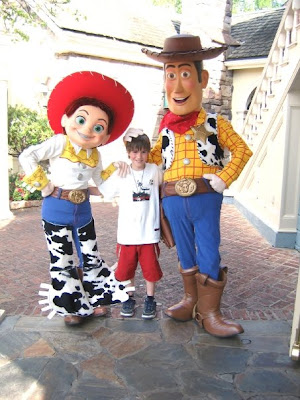 A mason jar's main utility is of preserving. With this painting I am preserving the essence of Jean-Luc as a child, the many parallels of growing up and the role Pixar's films has had in capturing the imagination of generations young and old.
-
Update- Dec 18, 2010- To date Toy Story 3 has become the most successful animated feature film in history. It has amassed an staggering world gross revenue of $1,063,143,492 making it is the first animated film to break the 1 billion dollar plateau. It is currently the 5th highest-grossing film worldwide of all-time (behind Avatar, Titanic, The Lord of the Rings: The return of the King, and Pirates of the Caribbean: Dead Man's Chest.)